This past week Mark and I went to the La Leche League of MO conference. It was the first time we’ve gone anywhere together without any kids for TEN years! (And, technically we did have one with us, but he’s still in utero!) We were very grateful for my parents who hosted our kids for overnight fun. The conference schedule was packed and very tight. We got there at 8:30 on Thursday morning and didn’t leave until 10:30 Friday night. (The first day was scheduled from 11-10 [vendor set up is why we were earlier] and the second from 9 a.m.-10 p.m. These LLL conference organizers don’t mess around!)

We set up our Brigid’s Grove vendor’s booth first and Mark spent the majority of twelve hours two days in a row sitting at that booth!

After getting our booth set up, I set up our LLL Group’s boutique table. We always have a pretty good table, if I do say so myself. I’m not sure if we sold much though, since the sales are handled by the conference and a percentage of the profits comes later on (based on everything I had to pack back up to go home, I’m thinking it was not much).

We then had lunch and some introductory presentations and then a keynote presentation about making medical decisions which was given by a wonderful physician I’ve known since before I had Lann. I then went to her breakout session on “vaccinations and other controversial topics.” Due to the tight schedule, the next session began immediately and I enjoyed listening to a very informative session on Pumping in the NICU, for moms establishing a milk supply while expecting to be pump-dependent on a long-term basis. At dinner, I got to sit with LLL founding mother Marian Tompson (this was a perk of early registration) and got a picture with her. (Not the most flattering picture of me, but oh well.) I’m so inspired by these seven founders and what they contributed to the world. (I reviewed Marian’s book a couple of years ago here.) In the picture she’s holding her copy of the Amazing Year workbook that we distributed (with permission) in preparation for my own session the following day.

After dinner, I went to a session on Slow Weight Gain. Even though I’d signed up for another session after that, I took a little break and sat with Mark instead before going to an Area meeting for my Group’s area.  We then packed up the booth and took our wares to our room where we FaceTimed with the kids for a little while before bed.

The next morning began early with re-setting up our booth and getting some breakfast and then going to my first session which was called the Proficient Pumper and was about helping mothers achieve their breastfeeding goals while expressing milk. This was followed by a helpful session on assessment of tongue tie and then lunch. The conference organizers bought two of our nursing mama goddess pendants as thank you gifts for the two primary speakers and I was delighted to see Marian Tompson wearing our little nursing mama while giving her lunchtime presentation (which was about self-compassion).

After lunch, I got my Womanly Art book autographed and a fresh picture with Marian, both of us sporting our mama goddess pendants from Brigid’s Grove. 🙂

I opted to skip the next session, since I’d signed up for another one about pumping and I’d already been to two other pumping presentations by that time. I wanted to have a little down time to focus on my own upcoming presentations and make sure I felt centered and prepared for them. It was hard to focus though as I was nervous as well as distracted by everything else going on.

I sat in for a while during the alumni presentation where different anecdotes from LLL history were shared by Marian and other LLL “lifers.” Then, I got set up for my own first presentation: Create Your Amazing Year, using Leonie Dawson’s workbooks and my own experiences. I started out pretty nervous, particularly because there were people I’ve known for a long time in the audience and somehow it is easier to present in front of “strangers” than to friends! I warmed up though and surprised myself by sharing more little snippets about my students than I originally meant to. I was worried about sounding like “commercial”–either for the workbooks (for which I make no money!) or for my own business, since my experience of the Amazing Year workbooks is integrally tied to the jewelry business Mark and I have co-created—but it didn’t feel that way at all. I’d worked really hard on making a little slide show presentation that was a good visually accompaniment to my ideas and had all kinds of happy, useful little pictures and quotes and inspiration in it. I finished my hour with exactly four minutes to spare, which was pretty good since I certainly had never rehearsed it verbally to make sure my timing was right! I learned from birth class work though that one page of notes gives me one hour of material and that held true for this work as well.

After this session was dinner and a nice presentation by Marian about LLL Leaders changing the world. Following dinner was my final session, Active Birth and Pelvic Mobility. Since my session was scheduled from 7:30-9:30 p.m., I anticipated that people would do “conference math” and decide to go home early and skip my session. I was right. I had 12 people signed up, but only three actually came and none of them were actually registered for the session! We  had a really great time together anyway and they seemed appreciative of the information and excited about what they learned. I finished early on purpose to make sure to get back for the close of the silent auction, but ended up having to wait around then for the other speaker’s session to finish before the auction actually closed. I got outbid on the lovely breastfeeding mermaid picture I wanted, but I did win a nice new, red BumGenius diaper and some Soft Star Shoes for new baby boy.

While our Brigid’s Grove booth was never exactly hopping with activity, we did double the (very modest) sales goal we’d set before leaving. I told Mark not to expect many pewter sales, because lots of people don’t have tons of extra money they bring to conferences, and to expect lots of small bead and charm sales from people wanting to bring little, affordable gifts home to people. I was totally wrong and most people skimmed right past the traveling bead shop (I think because it was too much to look at for the tight conference scheduling) and headed straight for the pewter. We sold completely out of our breastfeeding mama goddess pendant! We were invited to have a booth at an upcoming LLL mini conference in St. Louis in August and we’re strongly leaning towards going. 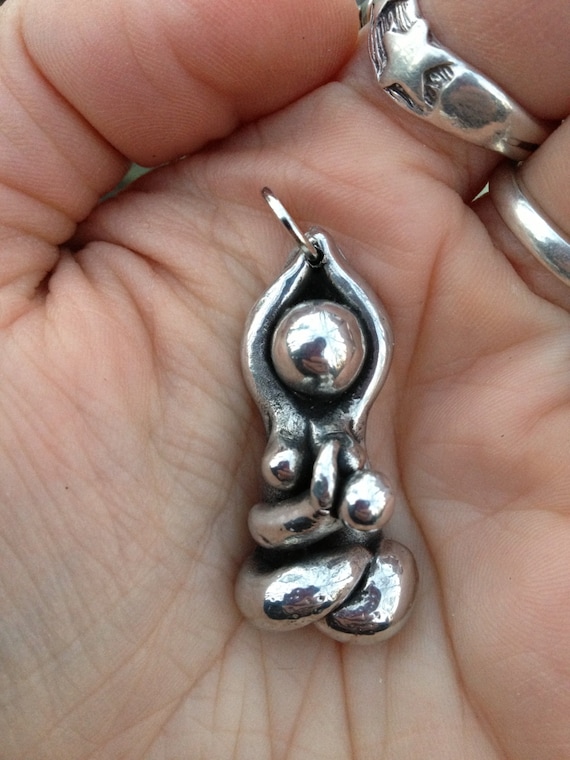 …She’s just feeding her baby. Is she? Or is she healing the planet at the very same time?

Milky smile, fluttering eyes, smooth cheeks, soft hair. Snuggle up, dear one. Draw close. Nestle feet to thighs, head to elbow. And know that you are encircled by something so powerful that it has carried the entire human race across continents and through time for thousands upon thousands of years on its river of milky, white devotion.

The most beautiful thing about conferences like this is the sense of continuity with work that has been going on for 60 years, as well as a sense of connection with the many, many women present and past who have served other women. The face-to-face time with Leaders scattered around the state is invaluable and I am surprised by how connected I feel with these friends I only see at most once a year. I’m not sure what my role in LLL will be in the years to come, as I feel myself moving further and further away from my original interest in one-on-one helping, but I’m pretty sure I can’t help but be a “lifer.”

One thought on “LLL of Missouri Annual Conference”