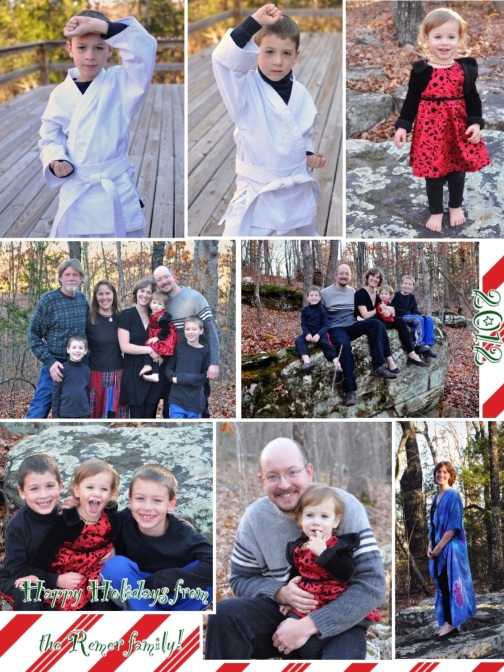 My effort to make a collage greeting card this year to actually mail out to my family members was thwarted by an uncooperative WalMart.com photo site that would not allow me to preview my collage (meaning I would just have to randomly accept the results!). So, I decided to make a virtual holiday greeting this year and thought I’d pair it with a companion update post about what we’ve been up to 2012 (kind of like one of those annoying holiday letters, only more annoying, because I’m not even bothering to actually send it via real mail!)

Two big projects to report this year: First, thanks to our work party (more on this later) we have a completed greenhouse building! You can read more about the process and progress on our not-often-updated farm blog: 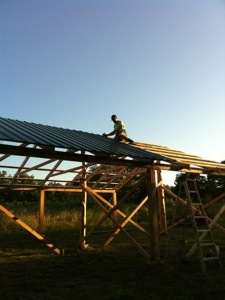 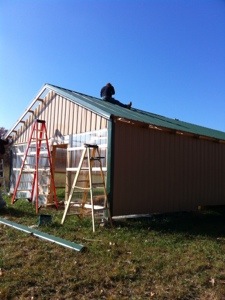 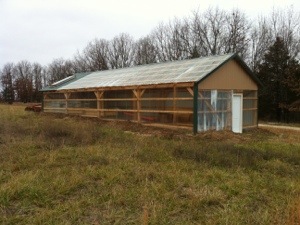 Second, Mark has launched a Let’s Play series of Minecraft videos on his YouTube channel, RockHoundGames. Check out his most recent video and if you or your kids are Minecraft fans make sure to become a subscriber!

Speaking of Minecraft, the boys are big fans as well and even included a Minecraft themed picture in our family photo shoot!

The boys have changed a lot during this year. One important change is that they’ve both been taking Taekwondo classes at Vessell’s Fitness (same place my own brother and sister both used to go)! They’re really committed to it and go to class twice a week for a total of four hours.

Oblivious to the ninjas stalking us through the forest…

They also take gymnastics class which I am less impressed with because it is twice as much money for half as many classes and 1/4 as many hours, but they absolutely love it! I got some poor-quality home video recently of their cartwheeling action:

She is turning into a “real girl” instead of a baby! As long as she wasn’t talking, I still felt like she was my baby. Now, as she adds new words every day, I feel like I’ve got a little small girl instead of a baby. I caught her just saying a brand new word in a quick, poorly filmed video (my cell phone was plugged in to charge and it is hard to take a video when you’re tied to a wall!). For those of you who are friends with me on Facebook, there’s a much longer version of “Can You Say…” uploaded in my videos there. 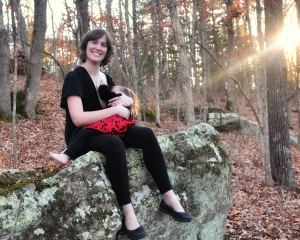 “Nonnies” on the rocks is a favorite! 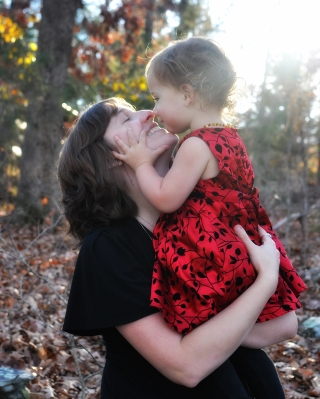 I’m still teaching at Columbia College—both online and in-seat at the Fort on an every session basis and in Rolla on a twice a year or so basis. I love teaching online because it is perfect match for family life and integrates almost seamlessly into my days (as long as you don’t talk to me during paper-grading time!). I also love teaching in person because I love the face-to-face interaction as well as having the same students in multiple classes so that our relationship deepens over time. In January, I start teaching a hybrid class for the first time (half online/half in-seat). It should put me home before the kids get home from taekwondo! I’m really looking forward to that format. I’m still working (slowly!) on my D.Min degree in women’s spirituality. I’ve finished nine of my classes so far and I’m thisclose to finishing the tenth. On July 1st, I became ordained as a Priestess with Global Goddess and I’m really enjoying branching out more formally into the “women’s mysteries” and rites of passage work that I’ve been doing informally for a number of years. I was thrilled to officiate at my brother’s wedding in October and then at another wedding just last week.

On the priestess rocks in our woods and wearing my beautiful silk robe hand dyed by my friend. 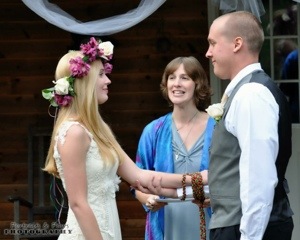 Handfasting with the lovely bride and handsome groom!

Other things that happened with our family in 2012…

We also had around 25 work parties with our amazing work party group. Being involved in this mini-community has enriched, enhanced, and changed our lives in many good ways. Our biggest project as a group was to help our friends build their straw bale house from scratch! (In 2012, we personally benefited from work party in these ways: gutters on our house, new coat of plaster on the interior living room and kitchen walls, and almost completely finishing our huge new greenhouse over the span of three work parties [see pix in Mark’s update above]). Here is a beautiful video slideshow of our friends’ straw bale house project (my dad, Tom, shows up a lot in this video because he helped on lots of other occasions other than our scheduled work party days):

This is an impressive amount of progress for less than a year!

Happy Holidays from our home to yours! 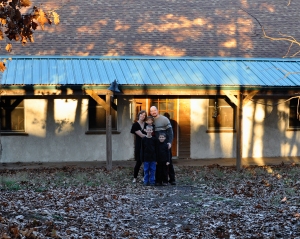 —
All photos, save the greenhouse pix, taken by the incomparable Karen of Portraits and Paws Photography.