The last phase of our epic California trip was to relax and enjoy our favorite beach on the Central Coast: Pismo Beach. This is the final post (thank goodness!) in my vacation recap series. The others are as follows:

Pismo is such a familiar setting to us, that I don’t have a lot of narrative to introduce the pictures.

Pismo picture gallery: if a closer view is needed, just click one and then follow through them in slideshow format.

One of the first things to try was some boogie boarding! My sister-in-law went. I’ve never been!

Trying to get a picture of the boogie boarders coming in.

Mark took Alaina out into the waves a little.

View from the pier. Love this place!

Went to the crepes place for breakfast one morning. This Nutella jar is speaking my language.

Eroded steps further down the beach by the caves.

Ah! This is the kind of beach I like. Nearly deserted, foggy, cold. Stinky seaweed, is less awesome, but finding agates and strolling with my sweetie is fun.

The kids found a cool crocodile.

My mom and sister enjoying an early morning stroll.

We drew a labyrinth with our toes.

Labyrinth PLUS pier! Go, me 🙂

We love this tiny beach cottage with the encroaching hotel behind.

This was actually from our first day in Pismo but ended up out of order.

With cousin Adri. Alaina loved her so much!

Yes, Alaina and Z are both trying to do a Vulcan salute thing.

One of our final family beach pictures.

On my cousin’s 21st birthday we went to a steakhouse sort of place called McClintock’s that no one in the group was particularly familiar with. After sitting down, we were horrified to see the cheapest hamburger was $27. And, this was a “family style” dining sort of place, so we ended up spending $50 (for just our own family!) to grab a few greasy onion rings out of other people’s fingers, basically, and for Mark and I to split a mediocre hamburger. Not. Impressed. Luckily, dinner came with dessert—a measly scoop of ice cream or a “dessert liqueur.” Yes, please. I quaffed that Kahlua. The “atmosphere” did not match the prices. If it had been a normally priced hamburger place, perhaps it would have been normal to see cougar paws on the wall and polaroid pictures of various guests, and a gigantic stuffed bison, and waiters pouring water into glasses held on top of people’s heads, but for $27 hamburgers, I would have expected something a little classier (and tastier)! Maybe it was a feature of where I come from? I’m having an epiphany as I type—to ME, from good old mid-America, stuffed bison and greasy onion rings are normal and should be cheap, to coastal dwellers perhaps they are a wild novelty worthy of upscale prices?!?! I remember once being disappointed to go to a Pismo restaurant proudly featuring none other than, “real Kansas City style barbeque!” What the heck? I want clam chowder!

The next morning my sister-in-law said they had hoped to sneak out before anyone else and scrawl McClintock’s! in huge letters on the sand to greet us on our beach stroll. They didn’t manage to do it, but imagining it was funny enough on its own!

While at Pismo, we also got semi-obsessed with taking silhouette pictures. Some my uncle took with his camera and his more practiced eye. The others we took after he went home and they didn’t turn out quite a clear.

I used this as my Facebook cover image for a long time!

These are the ones we tried to take ourselves.

I wanted a jumping picture, dang it!

This is my, “why can’t you manage to take a picture of me jumping?!” silhouette pose!

This was quite a trip and a family adventure. It took a lot of stressful planning to pull it off and it also took a lot to keep us going through each phase, but we did it!

We flew out of the small San Luis Obispo airport at 6:00 in the morning. We were right on track getting to our layover in Phoenix and then…after over an hour in the air on the way to St. Louis, the plane began to experience difficulties that made the pilot concerned it was not safe to fly, so we turned around and went back to Phoenix. We could hardly believe it! After we landed, we began to feel lucky, because I overheard some of the flight attendants talking and I think the problems may have been more serious than they’d been letting on. We each got a free lunch voucher and enjoyed a panini and after only a little waiting we got on a new plane and headed to St. Louis, again. We didn’t end up getting home until about 9:00, when we’d expected to be home by 3:00, but we were safe and sound and home.

It wasn’t until the next morning that we discovered that somewhere between our two trips to Phoenix, the boys had left behind their iPod, the android tablet, and all of our cell phone chargers, headphones, etc. We made a lot of calls and were resigned to being out of luck, when the next afternoon I got a call from Angie, a U. S. Airways baggage department worker in Kansas City who saw my number come up when I Facetime called the ipod trying to locate it. The bag of electronics had been back to Phoenix and then back to St. Louis and then on to Kansas City without the bag being picked up by anyone. So lucky! She FedExed it back to us and the boys had their equipment back in their hands without every fully realizing how lucky they were! 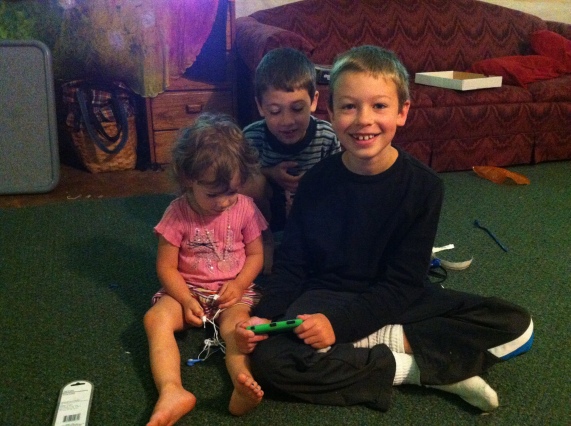