Ever since 17 weeks pregnant I have been able to pick up what seemed like two heartbeat sounds via doppler at home. The first time it happened was so surprising and so distinct (and the rates were different) that I went to our first ultrasound halfway expecting to find out that I was having twins. It was only one little boy though, but he was so squished up against his anterior placenta that I still kept thinking it might be twins and they missed one somehow. I developed somewhat of an obsession with trying to figure it out and felt like I had a split personality—one part of me was completely convinced there had to be two babies and the other part of me was completely convinced that there could only be one and the two parts duked it out constantly, so I could be equally as certain about either possibility within the span of about five minutes. Luckily, the Pregnancy Resource Center in a nearby town was looking for volunteers to do training ultrasounds and so I had the opportunity to go there last week for a quick ultrasound and finally set my mind at ease by stopping the crazy-making flip-flopping my head was doing about the whole thing. I’d told my doula/friend that I felt “crazy” about thinking it could be twins, but that “I’m not just some random yahoo with a doppler!” Well, it turns out, I am just a random yahoo with a doppler as the second ultrasound also showed just one little boy baby (with one heart) who has been in there mystifying me!

So…for those other random yahoos with dopplers out there googling for answers, here were my reasons for thinking it could be twins:

And my reasons for thinking it wasn’t twins:

Before we knew for sure, I took a video to try to show what I was hearing. Unfortunately, it isn’t as convincing as some of the non-video’ed times were (like when one was at the very top right and the other very low on the left!), but it is what I have to share as a “how to know whether you, too, are a random yahoo with a doppler” data point.

So, this experience, coupled with my gender mispredictions, means that basically my overall “intuitive” track record during pregnancy is pretty terrible! At the ultrasound they did let us listen to the heartbeat both ways—cord and back and coupled with the visual image, I could more clearly “see” what it was I had been hearing and how it was able to work (nothing really explains the rate differences though except normal variability in fetal heart rate and/or a none-too-spectacularly-sensitive-home-Doppler). Also, this was the first baby for which I’ve ever been able to see so clearly via ultrasound the exact location and insertion of the cord. It was very cool and I wish I had a picture of it to share!

Here are two of the pictures I did get: 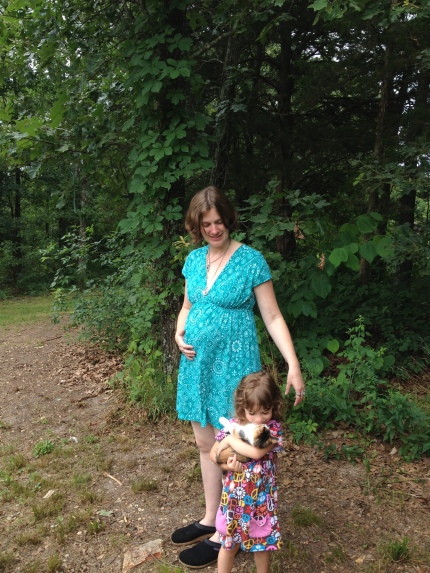 Now that I’ve passed 20 weeks, I do feel a lot of movement even with the anterior placenta, so the “one-sided pregnant” feeling is fading.