“By the time the baby boy spilled into my arms, I knew. Women were warriors. And I wanted to be part of it.” –Neva Bradley

(character in The Secrets of Midwives by Sally Hepworth)

While feeling somewhat pre-laborish in the last days of pregnancy, I stayed up way too late devouring a review copy of the new novel The Secrets of Midwives 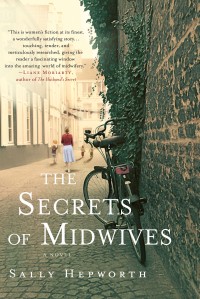 by Sally Hepworth. I  got it in the mail in the afternoon and by 1:30 a.m. that night, I’d finished the whole thing! In the past, I’ve been heard to remark that I can think of few things better than a novel about a midwife. Well…how about a novel about three midwives? That’s right, The Secrets of Midwives interlaces the three stories and pivotal life journeys of three midwives, who happen to be grandmother, mother, and pregnant daughter. Each midwife has a different personality and style of practice. In an intriguing style that kept me turning pages, the chapters are split between the viewpoints of each, allowing for multiple perspectives on the same relationship and personal issues.

Floss, the grandmother/mother, is retired from midwifery, but her chapters alternate between her early experiences as a midwife in the UK and her current life as a natural childbirth instructor. Neva, the daughter/granddaughter, is a hospital birth-center based CNM who is hiding her unexpected pregnancy with her own first child. Grace, the mother/daughter, is a CNM who attends homebirths.

The Secrets of Midwives contains elements of a romance story and elements of a mystery story. It blends the three women’s midwifery journeys in a creative, engaging way, including exploring the complex quality of mother-daughter relationships and communication vs. secret-keeping therein. It is serious enough to keep the pages turning, but not so “heavy” as to be depressing. There is a subplot in which the homebirth midwife is investigated by the state nursing board for possible malpractice and it felt relevant and contemporary to the fears and risks faced by midwives around the country. And, while reading as a pregnant woman myself, I appreciated that in this novel, with one pivotal exception, there are no scary births with bad outcomes—I find that high drama births resulting in maternal or infant death are a common feature of midwifery novels that often makes them somewhat iffy reads for pregnant women!

“That superhuman feeling people describe? It has nothing to do with the way the baby comes out. It’s about what happens to the mother. You become superhuman. You’ll grow extra hands and legs to look after your baby. You’ll definitely grow an extra heart for all the love you’ll feel.” –Neva Bradley

(in The Secrets of Midwives)

THE SECRETS OF MIDWIVES by Sally Hepworth

Disclosure: I was provided with a complimentary copy of the book for review purposes.

One thought on “Talk Books: The Secrets of Midwives”