There is a certain fire to books written about women’s health, empowerment, and feminism in the 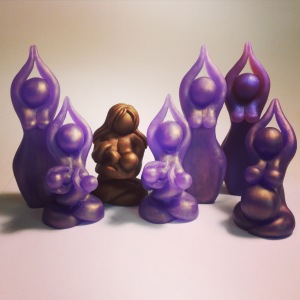 1970’s and 1980’s. I’ve been extremely fond of birth (activism) books written during that time period because they seem much less apologetic than books written today as well as much less concerned with appearing “biased” towards unmedicated birth (or various other topics). I also love women’s spirituality books of that era and while I’ve read a small handful of maternal activism books written in that time period, I haven’t read many about feminism itself. So, I recently finished reading a passionate, short collection of essays called Our Blood: Prophecies and Discourses on Sexual Politics, by Andrea Dworkin (1976). In it, of course, this section on birth and courage caught my eye:

“If we were not invisible to ourselves, we would see that since the beginning of time, we have been the exemplars of physical courage. Squatting in fields, isolated in bedrooms, in slums, in shacks, or in hospitals, women endure the ordeal of giving birth. This physical act of giving birth requires courage of the highest order. It is the prototypical act of authentic physical courage. One’s life is each time on the line. One faces death each time. One endures, withstands, or is consumed by pain. Survival demands stamina, strength, concentration, and will power. No phallic hero, no matter what he does to himself or to another to prove his courage, ever matches the solitary, existential courage of the woman who gives birth.

We need not continue to have children in order to claim the dignity of realizing our own physical capacity for physical courage. This capacity is ours; it belongs to us, and it has belonged to us since the beginning of time. What we must do now is reclaim this capacity–take it out of the service of men; make it visible to ourselves; and determine how to use in the service of feminist revolution.

If we were not invisible to ourselves, we would also see that we have always had a resolute commitment to and faith in human life which have made us heroic in our nurturance and sustenance of lives other than our own. Under all circumstances–in war, sickness, famine, drought, poverty, in times of incalculable misery and despair–women have done the work required for the survival of the species. We have not pushed a button, or organized a military unit, to do the work of emotionally and physically sustaining life. We have done it one by one, and one to one.” (p. 63-64)

Speaking of fire, I’m very much looking forward to Lucy Pearce’s new book, Burning Woman. My copy should be arriving soon! I’m honored and humbled to have contributed in a small way to the book:

This incendiary text was written for women who burn with passion, have been burned with shame, and who at another time, in another place, would have been burned at the stake. With contributions from leading burning women of our era: Isabel Abbott, ALisa Starkweather, Shiloh Sophia McCloud, Molly Remer, Julie Daley, Bethany Webster…

I also read two good articles this week, one about mothering the mother:

And then there’s birth. Whether she delivers by an unmedicated vaginal birth, a medicated vaginal birth, or a C-section, the effort will be herculean, unlike any physical or emotional challenge she has faced to date – unless she’s already had a baby, that is. Giving birth requires a mother to push herself light years past her own limitations. She will be skyrocketed out of her comfort zone into a foreign land that demands strength, stamina, resilience and a shocking amount of trust – that her body really is designed to do this, that her tiny, yet-to-be-born baby is tough enough to handle all that pushing, gripping, and squeezing, and that this is an event that will eventually be over (those 35-hour labourers know exactly what I’m talking about). Along the way she’ll discover a crystal clear truth that she’ll lean on during the other heart-wrenching, body-challenging experiences that will inevitably come her way during the course of her life: the only way out is through…

via Mothering the Mother: New Mothers Need a Focused Period of Rest and Recovery

And, the second about four things to avoid if you want to have the birth you want:

So, best case scenario: You aren’t afraid and sneak off to your birth cave. Turn off your human mind and think very, very carefully (beforehand!!) about who you invite into this space.

In my personal and business life, we’ve been making tons of beautiful Story Goddesses and shipping them to fascinating locations like Costa Rica and Puerto Rico and Kuwait, as well as delighting in seeing photos of them that customers send of the goddesses enjoying travels on beaches in Cornwall and in pear trees in the UK. 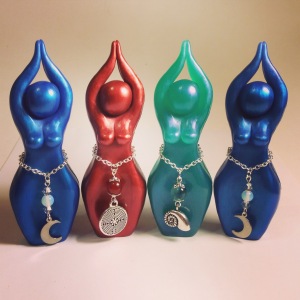 I’m wrapping up a really fulfilling Practical Priestessing course. I’m also getting ready for a new online workshop about creating mother-daughter circles: Pink Tent Rising. I survived another session of grading papers as well as balancing everything else (even though I felt like I couldn’t do it, somehow I could. The only way out is through, just like birth! 😉 ). Tanner says adorable words like “kiwi” and my brother, sister-in-law, and fabulous nephew moved right next door to begin building

their own house. My parents are getting ready to have an epic celebration party of their fortieth year of homesteading here in Missouri. We celebrated the 21st anniversary of our first date, I turned 37, and enjoyed Mother’s Day this month. Zander’s tenth birthday is right around the corner and both of my parents’ birthdays too. Mark had a vasectomy last month, so our childbearing years have fully closed and I feel really great about that decision. I still haven’t heard anything back about my dissertation (4 months now!). We also took a mini vacation to Big Cedar Lodge on Table Rock Lake and took the kids to the Dinosaur Museum in Branson. 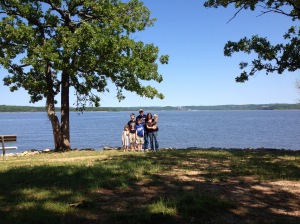