Instructions for living a life:
Pay attention.
Be astonished.
Tell about it.

I saw this quote on another mother’s blog yesterday and loved it. To me, it sums up the reason why I continue to write this blog. I have so many things going on in my life and I often wonder why I bother to continue writing blog posts. Does it matter at all? Aren’t I just adding to the general cacophony of voices and wild, information overloaded chaos of the internet (and even of the birth activist sphere in general). I feel almost compelled to do so though. And, really, the reason why is to tell about it. There is a lot to be astonished by in one’s everyday life. While I can get distracted and frantic and lose my present moment orientation, I do pay attention a lot. To a lot of things. A friend told me at my blessingway that I live my life with more intention than most people she knows. I considered that to be a great compliment—and, I also think I live my life with a lot of attention. Sometimes that attention may seem like excessive navel-gazing and very often it is excessively self-critical (and, isn’t that being self-centered, she says critically and self-evaluatively?), but I feel like I am a generally observant person, paying attention to my place in the world and the manner in which I walk through my day. And, the paying attention is intimately involved with then wanting to tell about it—here, on my blog 🙂

Here’s what feels astonishing about my life today. Six months ago today I gave birth to a little treasure. I feel like every day for the past six months I’ve experienced astonishment that she’s here—where did you come from, I ask her. She’s magic. I can hardly believe it has been six months already and yet, it also feels like she’s been here forever. And, guess what? My friend who has been waiting for her rainbow baby to be born, gave birth to her own precious daughter this morning. So, now our journeys share one more point of connection.

I really, really wanted to write an effusive blog post about my baby today in honor of her sixmonthabirthday. However, the end of the summer session is wrapping up and I had many papers to grade instead. I spent naptime working on them with the plan to reward myself with a blog post after finishing my grades (though, since I planned to grade 22 papers and 11 exams, you can see that something was awry in my calculations!). She woke up of course, after my only having graded 11 papers, and needed me to hold her rather than to write about her and so now I am here at almost midnight, needing to go to bed rather than to gush. Anyway, my happy, BIG, smiley, adorable, friendly, charming, unflappable, cooperative, sitting-up-and-working-on-craw​ling-and-pulling-up girl is six months old today. Her head smells like apricots and flowers. She loves watching her big brothers. She loves watching chickens and cats. She loves watching me. While I’ve written a lot about what an easy baby she is, she also likes to be held and toted along pretty much everywhere I go—maybe some people would define that as “high need” (i.e. “I can never put her down!”). I, however, think that is biologically appropriate baby genius. She is very grabby and reachy lately. My mom described holding her like “holding a bag of snakes,” because she is constantly on the lookout for something to snag. She has begun pushing up on surfaces so that her legs are standing (but her hands are still on the surface—so, not pulling up exactly, but pre-pulling up). She LOVES to find and eat paper and tear up catalogs. She laughs like crazy if I make monster noises on her belly. We tried to give her some solid food, but she gags and spits it out, even though she appears captivated by other people eating food. We still do EC (elimination communication) and she sleeps all night with a dry diaper. She always wakes up with a smile. She thinks Zander is hilarious, but isn’t very comfortable with him holding her. When Lann holds her, she snuggles down on him with total trust (even though he staggers under her weight—she weighs almost 18 pounds now and he weighs under 50). I love having a baby while also have a 7.5 year old. He carries her to the car for me. He watches her while I take a shower. He can hold her while I cut up vegetables or do something food-prep related that needs two hands. It is awesome.

Despite grabbiness, she strokes and pats faces very gently. It is very sweet. She likes to ride in a pouch on my hip checking out the action. She likes to nurse best while lying down in bed—she tucks her feet up on my legs and puts her hands on either side of my chest. She has beautiful skin and beautiful eyelashes and her eyes sparkle with the delight of life. She is chubby and not petite. She is my most relaxed, settled baby—she rarely gets scared, hurt, or upset by things. She’s tough! When something makes a loud noise, she jumps, but then looks at me (to gauge possible severity) and then gives a big grin (the boys would both cry). If she tips and bumps her head or gets bonked or scratched by something, she usually doesn’t cry about it—my older son would have screamed and my younger son would have had a fit of rage. Her temperament is very steady and even. She has started to get more displeased if you take something away from her that she wants though—sometimes that provokes a protest. She also growls to herself while she plays with toys lately—she loves to empty a basket of toys and will sit on the floor working on this task for about 30 minutes. We think the growling sound is from listening to the boys play. I cannot believe how fast she is growing and changing. I try to take mental snapshots every day—her soft hair, her round cheeks, her little neck when her head is bent looking at something, her dark watchful pools of eyes, her careful and still clumsy hand movements and swiping grabs, her big gumbly smiles, her eyes fluttering closed at the breast. I pay attention. I am astonished. And, I tell about it. 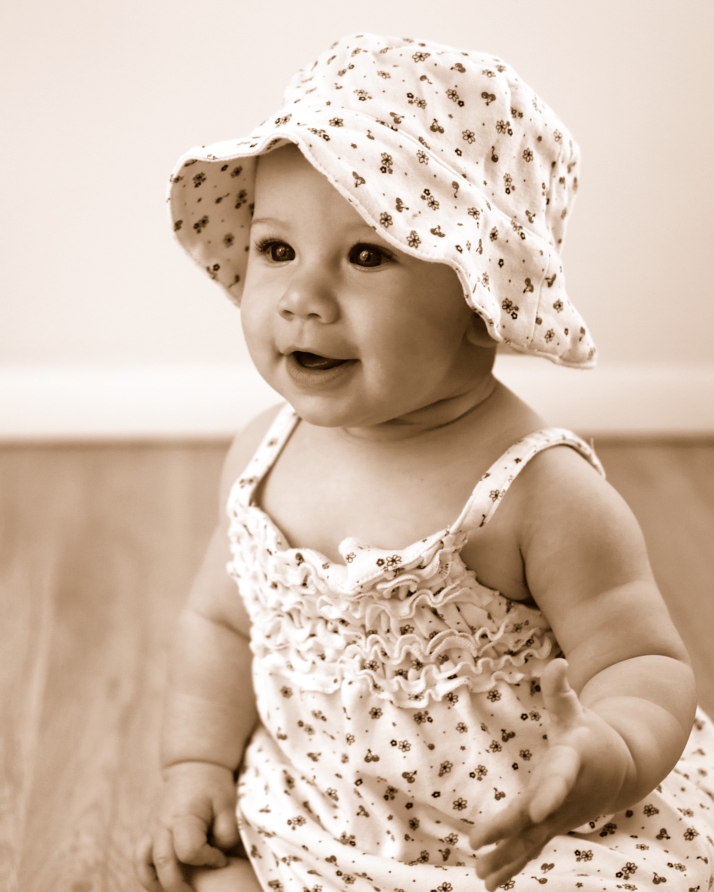 Telling you all about it...

15 thoughts on “Telling About It…”