A couple of months ago, I attempted to branch out from my usual style of polymer clay goddess figures (see past birth art posts). I’m not particularly satisfied with any of them, but I had this post saved in my drafts to share pictures of them anyway! I have some new translucent sculpey that I’ve been working with without very satisfactory results. It is stickier and meltier than regular sculpey, which makes it a challenge to work with. The figures don’t hold their shapes/poses as well while baking and the clay also folds into itself and sticks very firmly and it is hard to reposition/refigure things after having let it stick accidentally before you’re ready). Anyway, I tried to make this sort of “siren” (double-tailed mermaid) figure first and she’s all right:

I also tried a figure using only the translucent sculpey. She turned out looking like she should glow in the dark! 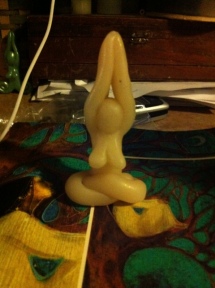 I also had a vision of making a sculpture with a small “offering bowl” in which you could place a crystal or something else. She kind of sagged over to one side in the oven though. She is my first figure with a face too! 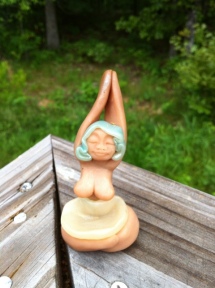 So, I tried again. This one sits on her own (leaning back very far), but I burned her by mistake!

So, I tried one more time. This one I used gold pigment on and I don’t really like how she turned out either. Back to the drawing (sculpting) board, I guess. After this third attempt I kind of gave up on my vision and haven’t tried to make any more in this style again. 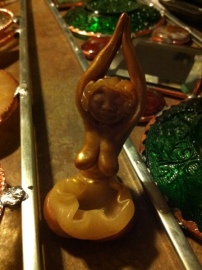 At the same time that I was experimenting with these figures, I also experimented with using a rubber stamp and pigment to make a flat disk of sculpey with the embossed sort of impression of my Goddess of Willendorf stamp on it. I then used that disk when I took a class in making a stained glass panel:

My panel is on the left and Mark’s is on the right:

Then, this past weekend I became ordained as a priestess (more about this later) and after that ceremony I decided to make another figure to add to my series. I’ve never made a standing figure before and she needs some work. I’m lukewarm about her–she didn’t turn out the way I’d envisioned and I need to experiment some more before I really add her to my series of 3-D journaling sculptures.