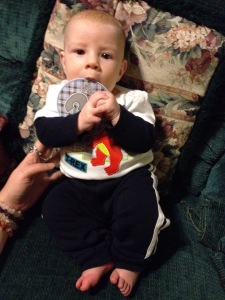 Yesterday we had a celebration day for Brigid’s Day (our biz-aversary) and Tanner’s three-month birthday ceremony in which we touched his little feet to the Earth for the first time.  We wrapped him in his silk painted “welcome” banner that we made this summer as part of my Sacred Pregnancy class and took him down to my special place in the woods (the very place that told me I was pregnant with him in the first place!). It was chilly and his poor little feet turned a little bluish-red during the feet touching! We touched his feet to rock, leaf-covered earth, and tree and I offered him a blessing of welcome and love. And, we sang two songs and drummed a little before fleeing through the sleety air back to the warmth of the house! 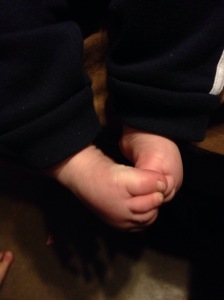 I wrote down some notes of things I want to remember about this threemonthababy. He weighs 14 pounds now and as I mentioned in a post a few days ago, he chews on his hands in a v. adorable fashion. Observe… 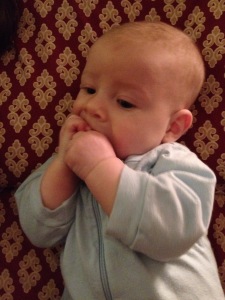 I planned to do our feet-touching ceremony on January 30th, but by the time we got home that day it was dark. I thought about dragging everyone out to do it anyway, but instead just gifted us all with waiting until Sunday for our little celebration.

Instead, that night I shared this picture taken McDonalds parking lot in Salem (a far cry from gentle feet touching Earth ceremonies!). When I handed Tanner back to Lann to put in the car seat, I noticed he was sporting one “smokey eye” make up treatment…

I posted the following day that Tanner’s new three-month nickname might have to be No Nap Tanner. Whew. He has a tendency to get extremely stressed out in the car and it seems to then lead to feeling insecure the following day involving only sleeping in twenty-minute scraps and being fretful. As I’ve written before, happiness as a mother is in direct proportion to length of nap taken by baby and we had a really negative, cranky Saturday overall. Lucky, Sunday was lovely and repaired all our nerves. 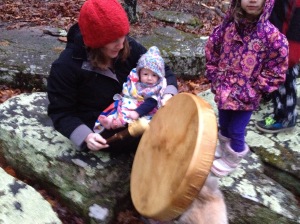 Like most of the people in my house, Tanner is a homebody sort. He does pretty well out and about, but then he reaches a point where he is very stressed and I can just tell he is saying, “go home and sit in our chair!” to me (I’m saying it in my own head too.) This is especially when we are in a loud, chaotic setting such a homeschool co-op or when we are doing lots of in and out of the car (both things were involved on Friday). The second week of class, he got stressed too when Mark tried to go to Wal-Mart to spend some of the waiting time for me doing something “productive.” It was a little too much back and forthing in the car (and Wal-Mart overstim) and Tanner was noticeably jangled, cranky, and unsettled the following day. He missed me too and that night after nursing, instead of going to sleep, he stopped nursing, tipped his head back and just stared and stared and stared into my eyes with a little smile on his face until he fell asleep (like, “I got her back!”). That said, I’ve also reflected several times recently, usually while nursing him in the night or snuggling him, is that he is such a lucky baby! He is snuggled just about 24 hours a day. He has nice warm nonnies on tap whenever he wants. He has two parents at home to love him. He has three siblings who want to take care of him and play with him constantly. He has a grandma who visits him almost every day and longs for more and a grandpa who also likes to see him. And, he has Cousin Power with a three months older cousin. Just the other day Zander said mournfully, “Mom is sooooo lucky. She gets to snug Tanner all night long and no one else gets a chance.” We feel lucky to have him 🙂 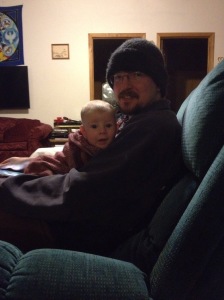 Another thing I wanted to mention is about elimination communication. This little guy continues to rock it. My EC skills were a little rusty, but I’m picking it back up again. One of the most noticeable cues is when those little chubby legs start kicking in the night. He’ll still be asleep, but the legs start wiggling and…sure enough, this is a pee cue. This doesn’t usually happen until 6:00 in the morning and then again at 8:00. Pees each time and goes right back to sleep, snuggin’ down with no more random kicking. Also, pulling on and off and on and off nursing behavior is often about pee, not about milk and not about nursing. And, those random potty thoughts. Totally spot on every time. The flaw comes with naptime–if he doesn’t pee before going down for a nap, needing to go wakes him up in 30 minutes or less, so I have to be very strategic and pay good attention. (Not much has changed, except the baby, since I wrote this older blog post so I’m not making a new one: The Real EC | Talk Birth.)

I also wanted to share that I finished the final two assignments in my final class at OSC yesterday. I am now ABD (all but dissertation). I can hardly believe it! I’ve been working on this degree for a long time and I actually expected it to take me several more months from now to finish my final classes. Finishing my dissertation project is one of my biggest goals for the year (I have several others too). Today, I was reminded in multiple ways that I did just have a baby three months ago. It is okay to pace myself and to take my time. So close though! So close.

I have all the time I need.

(Right? I made this one of my mottoes for the year in my Shining Year workbook…) 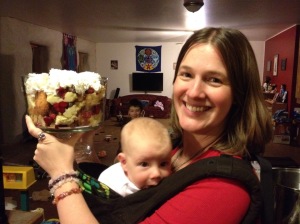 “Fire and ice” trifle for Brigid’s Day. I am inordinately proud of these and we’re having another one tonight with the leftover supplies!