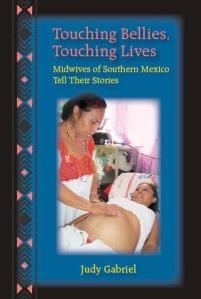 Every so often I end up reading a book that is nothing like I was expecting and yet is totally amazing. Touching Bellies, Touching Lives is one of those books. Subtitled “Midwives of Southern Mexico Tell Their Stories,” I was expecting a collection of birth stories from Mexican midwives. While there are birth stories, and everyone knows that I love birth stories, this book is so much more than a birth story collection. It is a personal pilgrimage, a preservation of the legacy of midwives, an examination of cultural birth practices, and a sobering first-hand account of the declining culture of traditional midwifery in Mexico. Many people may have the misconception that in Mexico or other South American cultures, midwifery is commonplace and maybe even flourishing. In Touching Bellies, we come to understand that Western medical practices are encroaching at a steady pace and that many midwives are elderly, retiring, and not being replaced. A steady theme runs throughout of women going to midwives for “belly massage,” but going to “modern” facilities to have their babies (unfortunately, they’ve imported some U.S. 1950’s-style practices in terms of birth position, birthing alone with no husbands allowed, and being treated dismissively in labor. This is along with a cesarean rate over 40% and up to 70% much in some cities).

The author, Judy Gabriel, takes multiple trips to Mexico on her quest to document the lives and stories of Mexican midwives (most of whom are age 65 and many of whom do not live to see the end of the book). She photographs the midwives and, with some hurdles with language barriers, listens to their stories–asking about the first birth they attended as well as any births that were problematic for them. She returns to them bearing hearing aids, dresses, and photos of family members from the United States. She travels through rough terrain and to distant villages on her quest to listen and learn from these midwives. I was completely absorbed by Judy’s dedication to her mission and her personal insights and life lessons as she travels and learns.

The “belly massage” practice for which Touching Bellies gains its title was endlessly fascinating to me (and to Judy, the author) with midwives regularly helping position the baby, release tight muscles, and ease aches and pains through a gentle process of abdominal massage and fetal manipulation. This aspect of midwifery care was so pervasive that when Judy would ask in a village where the midwives are, many people would not understand and say that they don’t know what she is talking about. When she asks for the woman who massages the bellies of pregnant women, everyone knows where to tell her to go.

In this quote, a 75-year-old midwife tells the story of helping a woman who is in premature labor. The doctors have tried to stop her contractions without avail and now say she must have a cesarean and the baby will most likely die:

“…The mother-in-law said, ‘This woman knows more than you doctors. You may have gone to the university, but, excuse me, for you doctors it is always puro cuchillo, puro cuchillo [just knives, just knives]. Leave the midwife to work in peace, and you’ll see what can be done without knives.’

So I did my work. I rocked the girl in a rebozo and massaged her belly, moving the baby up. The contractions stopped.

The doctors asked, ‘How did you do that?’

I said, ‘You were standing right there watching. I did it in front of you. I’m not hiding anything. You saw me rock her; you saw me massage her.’

‘Is that all you had to do?” they asked.

(The baby survived and was born at full-term six weeks later.)

The dedicated care for women, in touching their bellies, touches their lives. Almost all of the midwives in the book have access to nurturing touch and almost no other resources available and yet almost all of them report never losing a baby or a mother in childbirth.

I absolutely loved reading Touching Bellies, Touching Lives. It is an extremely interesting, thought-provoking, and thoroughly fascinating journey. The information about the gradual decline and near-extinction of midwifery in Mexico is sobering, but the book does end on a hopeful note.

You can read more about the book here as well as see some of the interesting documentary-style photographs of the midwives from the book (one of the points of Judy’s travels was to photograph the midwives and share pictures of their families in the U.S. with them and vice versa). The book itself is available via Amazon.

Disclosure: I received a complimentary copy of this book for review purposes.