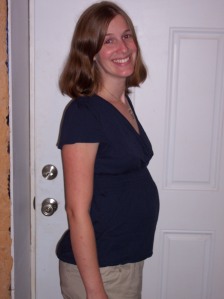 “cognitive dissonance” over my feeling about the overuse of ultrasound in our medical care system, coupled with the intense desire to “check in” with my baby and “make sure” it is okay, as well as to have as many opportunities to bond and develop a sense of connection as I can. During this pregnancy, it has been important to me to learn the baby’s gender. I really want to be able to name it this time and to not call it “it” through the whole pregnancy. I had an ultrasound this week at 21 weeks (this is the last u/s I plan to have), and as he also said at 18 weeks, the doctor said he thinks the new baby is a girl. While we had a good view and the images also looked very “girlish” to me and I think he is probably right, I don’t feel like he was committal enough for me to really name the baby and to start cleaning 7 years worth of boy clothes out of the closets! I need to have some confirmatory dreams or something! Part of the reason I don’t want to become too invested in a girl concept, is because in my heart I feel like I only grow boys and if the baby is really a boy after all, I do not want to have been overly attached to an imaginary girl. I’ve given birth to three boys already and long ago decided that I was “meant” to be a boymom.

I have two sisters and one brother and before I had any children of my own I always assumed, expected, and anticipated having daughters of my own. During my first pregnancy, I was pretty sure the baby was a girl. We had an ultrasound at 21 weeks during that pregnancy as well and the baby was very clearly a boy. I had to do some quick mental re-shifting and then was very excited about having a boy and have really loved the experience of mothering a son. During my second pregnancy, I had no ultrasounds, but I knew with a deep sense of certainly that my second baby was also a boy. I had 7 dreams that he was a boy and there was no space or reason for me to even consider having a girl. I did wonder if this very clear communication was to prevent any kind of “disappointment” about having a second boy—since I KNEW he was a boy, there was no room to “hope for girl.” I knew who I was having and THAT was the baby I wanted. While I know that the “ideal” family for many consists of a boy and girl, personally I actually prefer same-gender sibling pairs. Indeed, I literally feel grateful every single day that I have two boys and not one of each. They are fabulous buddies and I couldn’t imagine having anything else! I also hypothesized that since much of my life is focused around women and working with women, having boys is a necessary, balancing influence for me. I decided that sons are the children I can learn the most from the experience of mothering and that I was destined to be an exclusively boymom—that these boys were specifically intended gifts from the “universe” to properly balance the energies and influences in my life!

While we have planned for a long time to have three children, it took some time to come to the final decision to have a third—I felt like we had a pretty good thing going with our two and wasn’t sure any longer whether I really wanted to add anyone else to the mix. And, when we made the decision to have a third baby, it was intensely important for me to clarify whether we wanted to have a third baby or whether we were wanting to have a girl. I never wanted any of the possible sons to follow my first to feel as if they were the “wrong” gender or like we kept “trying for a girl.” So, my husband and I got crystal clear with each other that what we wanted was a third child in our family, not one of a specific gender. With my third pregnancy, I was sick for the first time ever, which made me think that the baby was possibly a girl, even though I was pretty sure another boy was in my cards (as I’ve noted previously, I had a lot of “you have three sons” dreams in the interim between my first and second babies). That third pregnancy ended unexpected at 14w5d and that baby was indeed my third son. 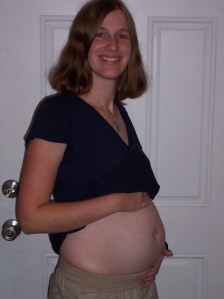 My current pregnancy is very much the same as my first two and I’ve had a feeling since the beginning that this baby too, was also another boy. I did wonder if this was a similar mental “trick” as with my second pregnancy—my observation is that if you know in your heart the baby is a boy, there is no room to “hope” for something else or to get attached to a “girl” image—but I also felt a sense of certainty that boys are simply the babies that I grow. Boys are the babies meant for me. After that 18 week ultrasound, when it was inconclusive but looked like a girl, I suddenly felt a small, secret spot in my heart that had been shut up a long time ago start to open up again. My original image as mother of a daughter. I thought she was long gone, but I discovered that she was hiding away very deeply and suddenly she came blooming up again. I was in Lowe’s with my husband after that ultrasound and suddenly I had a crystal clear image in my mind—my two boys were walking along holding hands dressed in matching vests (??!!) and behind them toddled a tiny girl wearing shiny pink shoes. While shiny pink shoes aren’t really my “thing,” after the 21 week ultrasound this last week, I went to the store and bought these: