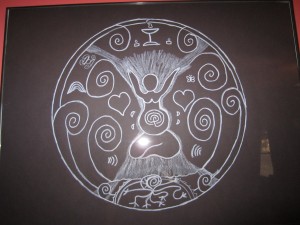 This has been my most art-full pregnancy and that has been so much fun! I’ve made polymer clay birth goddess sculptures galore, some womby finger labyrinths, drawn a number of black and white mandalas (see example to right!), made a specially decorated birth altar, and also made a belly cast. Each one of these projects has been meaningful to me in a special way. At my blessingway/mother blessing ceremony this past weekend, I was touched to be gifted with many birth art projects made for me by my friends. Really wonderful (more on this later, I promise!).

A little while ago, I wanted to incorporate the labyrinth metaphor into one of my sculptures, but was unable to make a tiny enough labyrinth to stick on her belly the way I envisioned, so she ended up with a double-spiral instead: 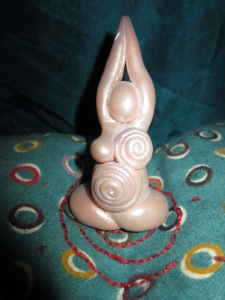 Spiral belly figure sitting on spiral birth symbol aromatherapy pillow gifted to me by my friend at my blessingway ceremony.

My current “issue” that I decided to work on through art is with pushing the baby out. I have never found pushing an enjoyable part of labor and the feeling of the baby’s head crowning to me is intense and scary and has—in the past—resulted in injury to my body that takes a long and challenging time to recover from. This is not a part of my birthing time that I am looking forward to. During my birth with Noah, since he was so small (15 weeks) there was no physical harm resulting from pushing him out, but there was the new association formed with having to “let go” of my baby this time in a very emotionally painful way.

So, I’ve been doing some mental work with myself about pushing, as well has having listened to my Hypnobabies CD about pushing the baby out. This baby is doing a very extreme cervical pressure thing every night and when I experience that, I consciously relax and release rather than hold tension in my pelvic floor. I’ve also been doing a birth visualization in which I envision the baby gently gliding out 🙂 So, I decided it was time for some Crowning Mother birth art. I made two sculptures, intending one as a doula gift and one for myself. I loved them while they were uncooked, but alas, I tried a new method—I mixed the polymer clay pigment with glaze and then I boiled them. Now, boiling has worked well previously, but I’d never done it with glaze before. They came out looking like they had peeling skin and were all mottled and discolored looking and very ruined to my eyes. I ended up deciding the one with gold pigment was still okay as she was (she has a peeling place on her back, etc. and you can see in the picture how her pigmentation is messed up/uneven): 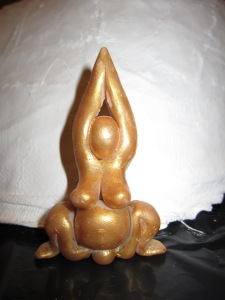 First attempt at a Crowning Mama...

The second one was so discolored and bad looking, that I used acrylic paint to paint her pink: 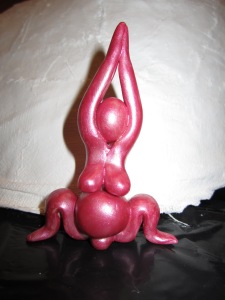 I know they look like they’re sitting on their babies’ heads, but that was the best way I could do it to make them be able to be stable and freestanding.

I also made a three generations sculpture that was supposed to be a gift for my mom, but again had with the bad glaze/pigment issue. I ended up painting it green and don’t know if I will end up giving it to her or not (she saw it by mistake, because I had it sitting on the counter still when she came over): 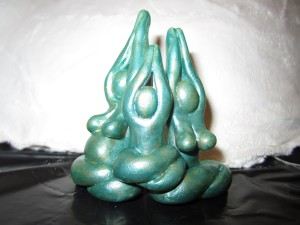 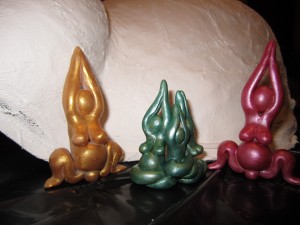 While I was at the painting, I also painted a mother-baby figure that my friend Summer made for me as a blessingway gift (don’t I have nice friends?! This was one of her first attempts at creating birth art and I was touched that she gave it to me! She left it white, saying that I could paint it if I wanted to. So, I painted it sparkly purple :)) 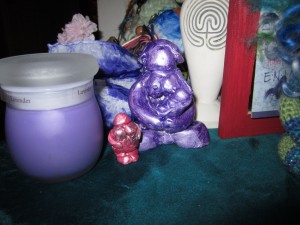 I decided to redeem myself artistically by making a new Crowning Mama figure the following day. This one I applied pigment to in my usual way and decided to bake. Interestingly, I accidentally set the oven for 350 degrees, rather than the normal setting for polymer clay! Yikes! When I got her out, the tips of her hands were smoking! (I’m reaching now, but perhaps some kind of subtle “ring of fire” issue being manifested here…;))And, the pigment turned from purple to blue in some places, which actually isn’t a bad effect, but is also not normal! And, I am critical of the shape of her arms—too fat, long, and no graceful taper like some of my others. 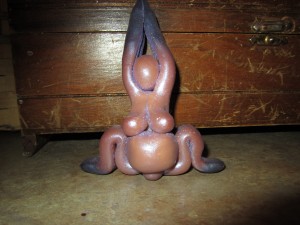 Now, I have to decide whether I’m going for round three or not! (Perhaps there is a lesson to be found here in that birth isn’t supposed to be perfect and neither is birth art.) I feel like accomplished my original goal, which was to make a positive crowning/pushing image for myself—I thought all kinds of helpful, “open” thoughts while creating this last one especially and imagined welcoming the feeling of the baby’s head, rather than feeling fearful of it! So, she reminds me of that feeling. And, maybe she—and thus, myself–are actually good enough after all.

10 thoughts on “Adventures in Birth Art…”