I go back and forth a bit on my relationship to blogging. Sometimes I feel like maintaining separate “spaces” in the form of different blogs and sometimes my attention feels too splintered and I feel like integrating everything together under one umbrella. I originally started out as a book blogger and kept my book blog going for several years as well as starting a blog specifically about birth art. I started this Talk Birth blog really as just a website for my local birth classes, but as it took off (while the classes themselves did not) I started to devote more energy to it. As time went on, I started a blog for Citizens for Midwifery during my time on their Board. I retired from the Board several years ago, but maintain the blog on a limited basis. As the role and presence of Facebook grew, I steadily moved more of the content I normally would have shared on the CfM blog to the CfM Facebook page instead and find this seems like the most effective use of my time. I was one of ICEA’s bloggers for a short time and wrote book reviews for CAPPA for two years. With all of these, I get an itch to centralize my writing in one location…here…rather than dividing my attention (hence the retirement of my book and birth art blogs several years ago also).

However, then sometimes things happen for which a separate space feels more appropriate–this was true when I had my first miscarriage-birth and felt very strongly that my writing about miscarriage needed a new, distinct home. Interestingly, now that three years have passed, I’m bringing more and more of my miscarriage writings over here, mostly in conjunction with The Amethyst Network, and I feel like it is important to include and acknowledge pregnancy loss in the spectrum of topics covered on a birth blog. After Alaina’s birth, I felt my miscarriage-specific blog was officially complete and I no longer update it. This summer I became ordained as a priestess and again the urge to differentiate blog spaces struck. I started a separate blog for my more spiritually oriented writings and my thoughts about feminism and religion. More recently still I became a contributor to a blog on Patheos. While these blogs intersect, my interest in Goddess spirituality having been born out of my own commitment to birthwork and women, separate spaces at the time feel most comfortable to me.

I’m not sure if anyone noticed and the actual words on the screen are hard to see in my blog header’s layout, but in an effort to communicate my own expanded focus, a while ago I did add “WomanSpace” to the title of Talk Birth.

I’ve minimally kept up a separate farm/land blog as well in various incarnations and this brings me to my motivation for the current post, as I’ve decided I’m going to go ahead and just include those farm life/land picture posts here in the future. This is my primary internet home/presence and I’d like to integrate the two spaces. I’ve resisted because I don’t want to turn off any regular, birth-oriented readers (same logic behind separating out to a new spirituality blog) by “boring” them with greenhouse pictures. Likewise, I have nonbirthy family members and friends who follow me here just for the few slices of “other life” that I include amidst the birth and breastfeeding content!

So, that brings me to…updated greenhouse pictures! 😉 The greenhouse has been almost exclusively a work party project. Mark has done a little bit of independent work on it, but it has primary been built by the members of our work party over the last year (we started it in March of 2012). During our work party this month, we got the building finished and got the grow beds (for aquaponics system) much closer to being finished!

Soffit and fascia up! 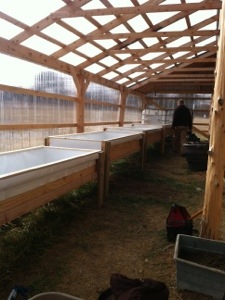 Grow beds looking the other direction.

This picture was taken before the greenhouse was actually finished, but it is still my favorite greenhouse picture!